Coastal birds can weather the storm, but not the sea 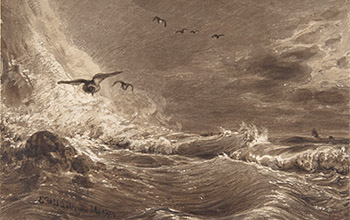 Bird populations can recover from hurricane impacts in two decades

How can birds that weigh less than an AA battery live through the immense power of Atlantic hurricanes? A new study in Ecology Letters finds that some coastal birds survive because their populations can absorb impacts and recover quickly — even from storms many times larger than those previously observed.

Researchers studied the resilience of four species of coastal birds, including the endangered saltmarsh sparrow. The scientists developed simulations that allowed them to explore how disturbances like hurricanes would affect the birds over time. Because the biologists used computational simulations, they were able to look at the full range of potential hurricane sizes — from storms that caused no bird deaths to storms that were more severe.

The results showed that four coastal species were able to absorb the impacts of storms across a wide range of severity. For example, a storm could cause mortality for a third of saltmarsh sparrows and clapper rails in one year, but it would be unlikely that their populations would decrease significantly over time.

The research found that two of the species in the study, saltmarsh sparrows and clapper rails, are declining from increased coastal flooding caused by higher sea levels. But in the simulations, the birds were often able to recover from large storms within 20 years, even when populations continued to decline from other threats, such as regular flooding.

“This study sends a hopeful message that ecosystems can be surprisingly resilient if given enough time after a major disturbance,” said Doug Levey, a program director in NSF’s Division of Environmental Biology, which co-funded the research with NSF’s Division of Biological Infrastructure.