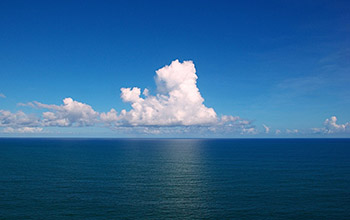 A key question for climate scientists in recent years has been whether the Atlantic Ocean’s main circulation system is slowing down, a development that could have dramatic consequences for Europe and other parts of the Atlantic rim. But a new study suggests help may be on the way from an unexpected source — the Indian Ocean.

The new study, by Shineng Hu of the Scripps Institution of Oceanography at the University of California San Diego and Alexey Fedorov of Yale University, appears in the journal Nature Climate Change.

Atlantic meridional overturning circulation, or AMOC, is one of the planet’s largest water circulation systems. It operates like a liquid escalator, delivering warm water to the North Atlantic via an upper limb and sending colder water south via a deeper limb.

Although AMOC has been stable for thousands of years, data from the past 15 years, as well as computer model projections, have given scientists cause for concern.

The research is funded by NSF’s Division of Ocean Sciences.