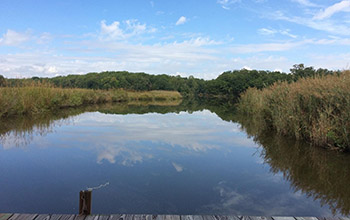 For most plants, carbon dioxide acts like a steroid: the more they take in, the bigger they get. But in a new study, scientists at the Smithsonian Environmental Research Center, Villanova University and other institutions discovered something strange happening in marshes. Under higher levels of carbon dioxide, instead of producing bigger stems, marsh plants produced more and smaller stems.

The results were unexpected, say the authors of a paper published in Nature Climate Change. For years, scientists had known that carbon dioxide was increasing the total biomass of marsh plants, so it seemed natural to think individual plants were getting bigger, too.

The researchers worked on a tidal marsh called the “Global Change Research Wetland,” home to one of the world’s longest-running field experiments on climate change. Inside experimental chambers, ecologists have been increasing carbon dioxide levels for more than 30 years. They’re tracking how marsh plants grow in a world with carbon dioxide levels nearly twice as high as today — levels we could see by the end of the century.

Every year, scientists have harvested the plants in the chambers and measured their total biomass, stems, roots and other key traits. With three decades of data, the biologists realized that in chambers with high levels of carbon dioxide, the total biomass of the marsh sedges increased by 20%. Richer carbon dioxide was spurring the marsh sedges to grow more stems in thicker clusters. But surprisingly, the individual stems had shrunk by 16%.