Test for life-threatening nutrient deficit is made from bacteria entrails 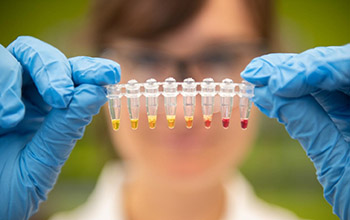 In a remote village, an aid worker pricks a sickly toddler’s fingertip and, like most of the other village children’s blood samples, this one turns a test strip yellow. That’s how an experimental malnutrition test made with bacterial innards could work one day to expose widespread zinc deficiencies blamed for roughly half a million deaths annually.

The innards include plasmids, which are loops of DNA. They are not the same DNA strands involved in reproduction and cell construction, but function instead like nano-organs with genetic programs that normally guide bacterial cell processes.

The new technology, resulting from a study led by the Georgia Institute of Technology and funded by NSF, shows high potential as the basis for an inexpensive, easy malnutrition test in the field. It could be expanded to test for other nutrients and health indicators, scientists believe.

Test samples are freeze-dried to a powder that can be read in the field. Precise analysis may be possible with a smartphone app. The test could overcome the clinical and logistical travails of other tests, including the need to transport samples and refrigerate them.

The test’s ability to quantify zinc’s clinically relevant levels, necessary to detect malnourishment, is one of its main innovations. Aid agencies could use a field version of the test for immediate information to guide policy decisions on nutritional interventions.

The researchers published their study in the journal Science Advances.

“This collaboration between scientists who have a deep knowledge of both biology and engineering has produced robust kits that may help those who do not have easy access to medical testing,” says Devaki Bhaya, a program director in NSF’s Division of Molecular and Cellular Biosciences, which funded the study.