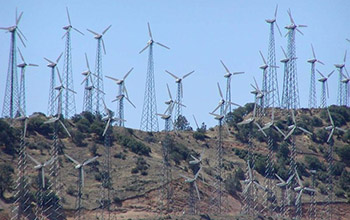 The wind is always blowing somewhere but deciding where to locate a wind farm is complicated. Now Penn State researchers have developed a model that can locate the best place for a wind farm and help with 24-hour predictions of its energy output.

“Normally, people planning to build a wind farm will look for good terrain and an average wind speed that is not too strong and not too weak, but consistent,” said atmospheric scientist Guido Cervone. “We found a more accurate and efficient way to look at wind predictability at specific locations, a key factor when considering building a new wind farm. With fossil fuels and nuclear energy, you know exactly how much energy you will have. But wind is not like that.”

For general electrical output, location is important, but being able to predict how much wind energy the farm will produce 24 hours into the future also matters. Electricity suppliers purchase the energy and want reliability. Managers would like to know, 24 hours in advance, how much power wind farms will produce.

The scientists used a historical set of past observations and predictions spanning several months. That provided a probability model of the forecast, in this case the available wind for power production.

“We observed that locations with higher average wind speeds are associated with larger degrees of forecast uncertainty, which increases the difficulty of predicting wind speed at these locations,” the researchers report in the journal Renewable Energy.

The research was funded by NSF’s Directorate for Geosciences.