The real Jurassic Park was a vast desert 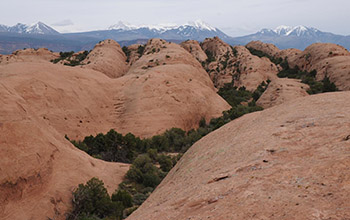 An ancient desert covered in sand dunes as far as the eye could see, where dinosaurs and small mammals once roamed, may have been the real Jurassic Park. Today, the Navajo Sandstone, as it’s called, is known for the beautiful red and tan sandstones that grace many of the U.S. Southwest’s national parks and monuments–for example, Arches, Canyonlands, Capitol Reef and Zion.

In the early Jurassic, the grains that formed these sandstones were deposited in the largest known sand sea in Earth’s history. The deposits show a record of desertification–the process by which fertile grasslands turn into deserts.

How did this landscape lose its water bodies, vegetation and animals? How long did desertification take to happen?

A new NSF-funded study published in the journal Geology reveals answers from rock layers that represent lake deposits. The lakes once occupied interdune areas, which served as watering holes for dinosaurs and small, extinct relatives of mammals.

The deposits’ 200-million-year ages show that parts of the Navajo desert in eastern Utah are much older than previously thought and, along with dates obtained from Arizona deposits, show that the sand sea was younger to the south. The lake and its springs tell a tale of a vast desert that, at times, had a wetter climate and more active hydrologic cycle than had been assumed.

The research demonstrates that the desertification process is complex, and that ages of sedimentary rock layers help answer important questions on how desertification takes place in continental interiors.

The research was funded by NSF’s Division of Earth Sciences.