Study shows how urban agriculture can push the sustainability of Phoenix 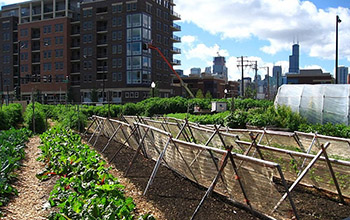 A community garden occupies a diminutive dirt lot in Phoenix. Rows of raised garden beds offer up basil, watermelons and corn, making this patch of land an agricultural oasis in a desert city of 1.5 million people. In fact, this garden is contributing in various ways to the environmental sustainability goals set by the city council in 2016.

“Our analysis found that, if Phoenix used only about 5% of its urban spaces [2% of its land, and about 10% of its building surfaces] for urban agriculture, the city could meet its sustainability goal concerning local food systems,” said Matei Georgescu, co-author of the study. “Urban agriculture would also contribute toward the city’s goals of increasing open space and reducing environmental impacts from buildings and land use.”

The researchers estimate that nearly 28 square miles (5.4% of city space) are available for urban agriculture in Phoenix. That could supply the city with some 183,000 tons of fresh produce per year, allowing for delivery of an assortment of fruits and vegetables to Phoenix’s existing food deserts. That means the city’s own urban agriculture output could meet 90% of the current annual fresh produce consumed by residents.

The research is funded by NSF’s Division of Mathematical Sciences.