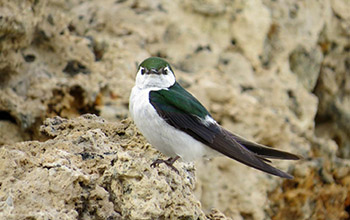 As temperatures rise, desert birds need more water to cool off. At the same time, deserts are becoming drier, setting some species up for a severe crash, if not extinction, according to a new study published in the journal Proceedings of the National Academy of Sciences.

Last year, the researchers documented a collapse of bird communities in the Mojave Desert over the last century – 29% of the 135 species that were present 100 years ago are less common and less widespread today. The scientists have now identified a likely cause: heat stress associated with climate change.

The latest findings, part of the UC Berkeley Grinnell Resurvey Project, come from comparing levels of species declines with computer simulations of how “virtual birds” must deal with heat on an average hot day in Death Valley, which can be in the 30s Celsius — 90s Fahrenheit — with low humidity.

These temperatures are, on average, 2 C (3.6 F) hotter than 100 years ago. The birds the model predicted would require the most extra water today, compared to 100 years ago, were the species that declined the most in the Mojave Desert, straddling the border between California and Nevada, over the past century.

Most threatened are larger birds and birds that have an insect or animal diet.

The virtual bird simulation was unique in allowing the researchers to identify the impact of a daily physiological stressor in the desert — heat — as birds leave the shade to forage for food or find mates. Other aspects of a changing environment, such as changing food sources and fire only add to the heat stress.

The team’s conclusions about California and Nevada desert birds may apply to species in other regions of the world.

The research is funded by NSF’s Division of Environmental Biology.