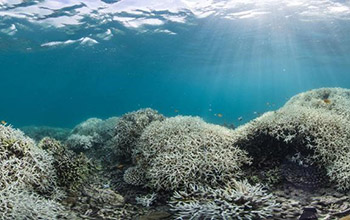 Local conservation can boost the climate resilience of coastal ecosystems, species and cities, and buy precious time in their fight against sea level rise, ocean acidification and warming temperatures, a new paper by NSF-funded scientists at Duke University suggests.

The paper, published in Current Biology, comes at a time when scientists are divided on whether to continue investing in local efforts to protect threatened places and populations or shift investment toward global efforts to reduce fossil fuel emissions.

“You need both,” said Brian Silliman of Duke University. “Our analysis of local conservation efforts shows that in all but extreme situations, these interventions significantly buffer the impacts of climate change and can buy our sinking cities and bleaching corals time to adapt until the beneficial impacts of global emissions reductions kick in.”

In the Florida Keys, for instance, local efforts to cull populations of coral-eating snails reduced coral bleaching by 40% compared to bleaching in non-treated corals during a three-month spike in water temperatures in 2014. They also promoted faster recoveries.

In the Chesapeake Bay, seagrass beds wiped out by warming waters and heavy pollution are now reappearing, largely due to local efforts to cut nutrient pollution flowing into the bay.

Understanding how human and climate stresses interact is critical for predicting when, where or if local interventions are likely to be effective and what their limits might be, so we can target our efforts accordingly and begin adaptive measures while there is still time, the scientists said. That’s especially true in areas with high human population densities.

“This research offers hope that we can slow the effects of climate change on marine ecosystems and thereby provide time to reduce greenhouse gas emissions,” said Daniel Thornhill, a program director in NSF’s Division of Ocean Sciences, which funded the research.