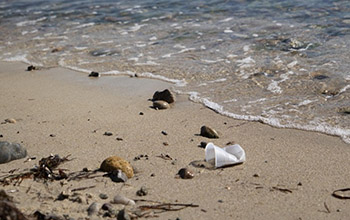 New research published by scientists at the Woods Hole Oceanographic Institution shows that polystyrene, one of the world’s most ubiquitous plastics, may degrade in decades or centuries when exposed to sunlight, rather than thousands of years as previously thought.

The study was published in the journal Environmental Science and Technology Letters.

“Right now, policymakers generally assume that polystyrene lasts forever in the environment,” says Collin Ward, a marine chemist at WHOI and lead author of the study. “One of our motivations for this study was to understand if polystyrene actually does last that long. The persistence of polystyrene in the environment may be shorter and likely more complicated than we understood. The chance for injury to the environment over decades is still there.”

Polystyrene has been routinely detected in the world’s oceans since the 1970s. The idea that sunlight degrades plastics is nothing new, Ward says. “Just look at plastic playground toys, park benches, or lawn chairs, which can rapidly become sun-bleached.”

The study shows that sunlight doesn’t just cause the plastics to physically break down; it also causes them to degrade chemically into dissolved organic carbon and trace amounts of carbon dioxide.

The research was funded by NSF’s Directorate for Education and Human Resources, through a Graduate Research Fellowship award to Anna Walsh of MIT.