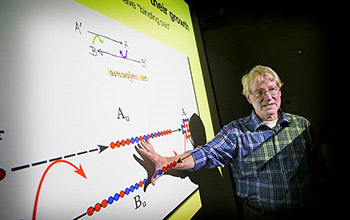 Cells undergo natural aging and death, processes that impact a multitude of cellular factors. A new Stony Brook University-led study published in Proceedings of the National Academy of Sciences (PNAS) provides a biophysical model that reveals how with age, damage accumulates in the shapes of cellular proteins and triggers death.

The finding opens the door to a better understanding of the molecular origins of age-related neurodegenerative diseases, such as Alzheimer’s and Parkinson’s, which all entail protein damage.

Co-author Ken Dill of Stony Brook said that the research team developed a Proteome Collapse Model that explores a central question in biology: How does the folding health of a proteome, the entire complement of a cell’s proteins, change with damage and age?

The team created a model of the worm C. elegans, common in studies of cellular aging. The researchers then tested how proteostasis — the successful folding, aggregation and chaperoning of proteins — is affected by cumulative oxidative damage.

The model explains the fact that worms raised at 20 degrees Celsius have a lifespan of 20 days, but worms raised at higher temperatures or in the presence of free radicals have a lifespan of only a few hours. The scientists found this shortening of lifespan to be consistent with the nature of the proteome collapse process. They also showed that it predicts the C. elegans survival curve (how many individuals are still alive at any given age).

The research was funded by NSF’s Division of Physics.