Lemurs rely on scent when it comes to finding a mate 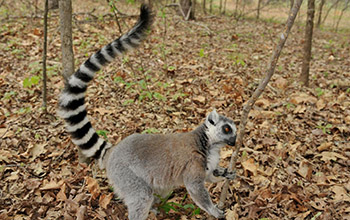 New research shows what they are smelling for is a compatible, quality immune system

A study of lemur scents funded by the National Science Foundation and conducted by researchers at Duke University finds that an individual’s distinctive body odor reflects genetic differences in its immune system and that other lemurs can detect these differences by smell. Lemurs use these differences to find a good match.

“Genital odors of ring-tailed lemurs provide honest information about an individual’s absolute and relative MHC (Major Histocompatibility Complex) quality,” write the researchers in a paper that appeared online in the journal BMC Evolutionary Biology. Duke also published the results in a research blog.

“Complementing evidence in humans and Old World monkeys, we suggest that reliance on scent signals to communicate MHC quality may be important across the primate lineage,” say the researchers.

MHC is critical to health and fitness, such that MHC genotype may predict an individual’s quality or compatibility as a competitor, ally or mate. From just one whiff, these primates can tell which prospective partners have immune genes different from their own.

The ability to sniff out mates with different immune genes could make their offspring’s immune systems more diverse and able to fight more pathogens, said first author Kathleen Grogan, who did the research while working on her doctorate with professor Christine Drea at Duke.

“Olfactory signals are ubiquitous among mammals and serve to advertise quality and reproductive state, but they are poorly understood,” said Michelle Elekonich, a program director in NSF’s Directorate for Biological Sciences. “We issued this award to study olfactory communication in the ringtailed lemur and mandrill because they both rely on scent to communicate, but they differ dramatically in how their social system is organized.