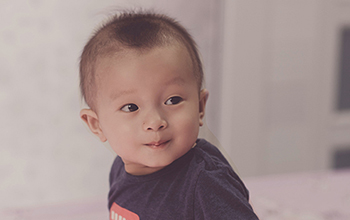 Gaze-following helps infants communicate. Through everyday interactions, hearing infants integrate auditory and visual information to establish a social connection between caregiver and child, and this has been shown to predict early word learning.

The result –- early experiences in ASL matter: Deaf infants exposed to ASL demonstrated stronger gaze-following than age-matched hearing infants. The study, published in Developmental Science, stems from broader research into early learning and finds that deaf infants of deaf parents may be more attuned than hearing infants to the social and visual signals of others.

Analysis showed that deaf infants were nearly twice as likely as hearing infants to accurately follow the gaze of an adult. The effect was most striking in deaf infants 7 to 14 months old.  These findings argue against a stereotype that deaf children suffer a variety of developmental delays and cognitive deficits, demonstrating instead a notable strength of deaf children and reinforcing the benefit of early exposure to ASL.

“This study reinforces other research that has shown the importance of visual language learning in supporting the social, cognitive and linguistic development of deaf children” said Soo-Siang Lim, program director for the Science of Learning Centers Program, which funded this work. “However, there is still much research needed to better understand underlying processes and mechanisms that account for the positive influences of early sign language experiences for children.”

The study was funded by NSF’s Directorate for Social, Behavioral & Economic Sciences.