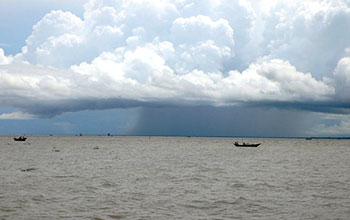 Flooding from torrential rains caused by cyclones and monsoons, as well as other catastrophic events, may move huge amounts of fresh wood to watery graves deep under the ocean, scientists have discovered.

Their research, published in Proceedings of the National Academy of Sciences, is the first evidence that trees may travel thousands of miles from their mountain homes to settle in the vast sediments under the sea.

Research led by Sarah Feakins at the University of Southern California looked at core samples taken from the seafloor more than a thousand miles offshore.

Geoscientists aboard the U.S.-operated research ship R/V Joides Resolution, which is part of the International Ocean Discovery Program and is funded by NSF, drilled more than two miles down from the ocean’s surface to the seafloor, then more than a half-mile down into sediments. The scientists combed through the sediment samples brought back. They discovered wood chips in the sandy layers dating back as far as 19 million years.

The analysis showed that wood in most layers came from lowland sources, but one layer contained wood from trees high in the mountains. “We found pristine pieces of conifers,” Feakins said. “These trees grow two miles above sea level in the Himalayas.”

The trees likely were uprooted during the last ice age by a massive release of water from the breach of a natural dam created by a glacier, a landslide or other process. In what must have been a surge of water, the trees rode rivers thousands of miles from Nepal through Bangladesh and into the Bengal Fan, the largest underwater sediment accumulation in the world.

The research is funded by NSF’s Division of Ocean Sciences.