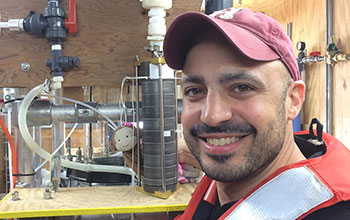 When waves break in the ocean, they inject tiny particles into the air, called aerosols, that carry organic molecules more than 5,000 years old. The discovery, published in Science Advances by Steven Beaupré of Stony Brook University and a team of scientists, adds to knowledge about the global carbon cycle by helping solve a long-standing mystery: what finally happens to these ancient marine molecules.

Decades of measurements have revealed that nearly all the organic matter dissolved in the oceans is up to several thousand years old. But scientists do not completely understand how this ancient organic matter is eventually destroyed.

Beaupré and colleagues performed experiments showing that some of this ancient matter is removed from seawater when wave-generated air bubbles burst on the ocean surface and inject aerosols into the atmosphere. By directly measuring the radiocarbon ages of the aerosols, the scientists estimate that 19 to 40 percent of the organic matter is at least 5,000 years old.

“Our study shows that a significant proportion of that organic matter is indeed quite old, and that the formation of aerosols by breaking waves could be a removal pathway for the old carbon found in the sea,” says Beaupré.

The pool of ancient organic matter is massive, holding about as many carbon atoms in the ocean as there are in all the vegetation on land or in all the carbon dioxide in the atmosphere, the researchers say. It is primarily created by photosynthesis and represents a long-term storage reservoir for atmospheric CO2, a potent greenhouse gas.

“Ocean chemistry is critical to understanding the global carbon cycle,” says Hedy Edmonds, a program director in NSF’s Division of Ocean Sciences, which funded the research. “This study adds a new piece to our understanding of where and how carbon moves in the Earth system.”