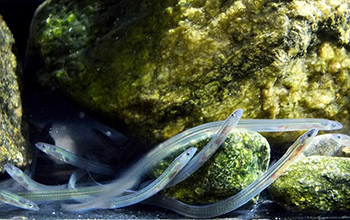 A new study led by NSF-funded researchers at the University of Miami Rosenstiel School of Marine and Atmospheric Science and the Institute of Marine Research in Norway found that European glass eels use their magnetic sense to “imprint” a memory of water currents in the estuary where they become juveniles. This is the first evidence that a fish species uses its internal magnetic compass to form a memory of current direction.

The findings show that glass eels use an internal compass to memorize the magnetic direction of tidal flows in the estuaries where they were juveniles, which may help them orient in moving water during migration.

“It’s an important step in understanding the migratory behavior of the commercially important European eel, and in expanding our knowledge of the orientation mechanisms fish use to migrate,” said Alessandro Cresci of the Rosenstiel School and first author of a paper in Nature Communications Biology. “Tiny young eels accomplish incredible tasks to migrate.”

The European eel (Anguilla Anguilla) is a migratory species that crosses the Atlantic Ocean twice during its lifetime. After hatching in the Sargasso Sea, eel larvae move more than 5,000 kilometers with the Gulf Stream until they reach the continental slope off Europe. There, they metamorphose into transparent glass eels and migrate across the continental shelf to the coast. Glass eels then enter estuaries, where they continue their migration upstream to freshwater until later in life (up to age 50), when, as silver eels, they navigate back to the Sargasso Sea to spawn and die.

The European eel is a commercially important species that is critically endangered, according to the International Union for Conservation of Nature. Eel populations have declined precipitously since 1980.

“It has been a mystery how these small fish find their way across the vast ocean to particular streams,” says Mike Sieracki, a program director in NSF’s Division of Ocean Sciences, which funded the research. “Now we have a better understanding of how they do that.”