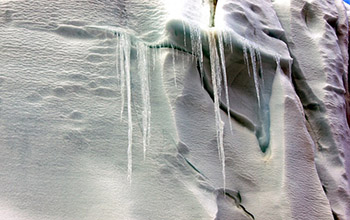 Antarctica’s ice sheet spans close to twice the area of the contiguous United States. Its land boundary is buttressed by massive, floating ice shelves extending hundreds of miles out over the frigid waters of the Southern Ocean. When these ice shelves collapse into the sea, they expose towering cliffs of ice along Antarctica’s edge.

Scientists have assumed that ice cliffs taller than 90 meters, or almost 100 yards (about the height of the Statue of Liberty), would rapidly collapse under their own weight. Release of that land-ice, it was thought, could contribute more than 6 feet of sea level rise by the end of the century — enough to completely flood Boston and other coastal cities. Now NSF-funded researchers at MIT have found that these rates of collapse may be overestimated.

In a paper published in Geophysical Research Letters, the team reports that for a 90-meter ice cliff to collapse entirely, the ice shelves supporting the cliff would have to break apart extremely quickly, within a matter of hours — a rate of ice loss that has not been observed in the modern record.

If a supporting ice shelf were to melt away over a longer period of days or weeks, the scientists found, the remaining ice cliff wouldn’t suddenly crack and collapse under its own weight, but instead would slowly flow out, like a mass of cold honey that’s been released from a dam.

“The current worst-case scenario of sea level rise from Antarctica is based on the idea that cliffs higher than 90 meters would fail catastrophically,” said Brent Minchew of MIT, a co-author of the paper. “That scenario is probably not going to play out.”

“Ice-cliff failure has rightly become a focus of significant investigations by the glaciological community,” said Paul Cutler, a program director in NSF’s Office of Polar Programs, which funded the study.  “This project adds further key insights to the mix.”