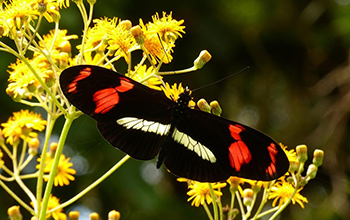 Scientists know that shared parts of DNA create color patterns in some passion vine butterflies. The patterns help the butterflies ward off predators.

Now a new study in Science provides evidence that the process of sharing DNA may be far more common than thought, offering a potential clue to how biodiversity unfolded.

An analysis of 20 butterfly genomes found evidence that many butterfly species — including distantly related ones — show a surprisingly high amount of gene flow among them, said James Mallet of Harvard University, the senior author of the study.

For Mallet and colleagues, understanding how butterflies pass genes back and forth — a process known as introgression — began with the creation of 20 new “genome assemblies” of various species.

The assemblies essentially function as genomic maps, and are constructed by sequencing short fragments of DNA, then assembling them in the proper order.

“DNA sharing had been shown in closely related species, but we wanted to probe deeper into the phylogenetic tree,” Mallet said. “What we found is astonishing: introgression even among species that are distantly related. ‘Species’ are simply not what we thought they were, and now we have the data to show that.”

The evolutionary tree of butterflies is a complete morass of interconnectedness, he said.

“These biologists used an ingenious strategy to identify the extent to which the species we see today resulted from hybridizations between species in the distant past,” said Steve Klein, a program director in NSF’s Division of Integrative Organismal Systems, which funded the research. “The findings illustrate how interbreeding promoted the origin of species and help resolve a centuries-old debate among the framers of evolutionary theory.”