For species that mate for life, bonding behaviors provide advantages 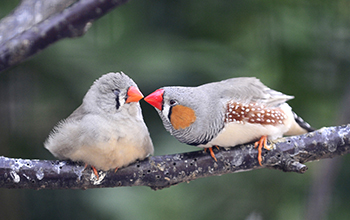 Male birds of species that form long-lasting pair-bonds often continue to make elaborate displays of plumage, color and dance after they mate with a female, encouraging the female to invest more energy into their brood.

An NSF-supported study by the University of Chicago and the University of North Carolina, published in the Proceedings of the National Academy of Sciences, shows how these behaviors often inevitably evolve in species that form pair-bonds.

Researchers used a mathematical population genetic model to show how scenarios could play out to species’ advantage.

For example, if females usually lay three eggs and their partners help raise the young, but a male with increased blue coloration causes his mate to lay four eggs, blue males would have more offspring than duller males, so blue males would become increasingly common over generations.

However, raising the extra young comes at a great cost to females, so females that lay only three eggs have an advantage over those laying four, and these females become increasingly common. But then, if the male does not create a display, females would lay only two eggs — the females become dependent on multiple aspects of the male’s display.

“The models enable us to see the wide ranges of conditions that can cause displays to become stuck in the population, evolutionarily,” said Maria R. Servedio, an NSF-funded UNC professor and study author.

“Why are physiologically costly behaviors retained in long-term reproductive partnerships? This research probes how elements of reproductive conflict can evolve into permanent reproductive cooperation in spite of their costs,” said George Gilchrist, acting deputy director of the NSF Division of Environmental Biology.