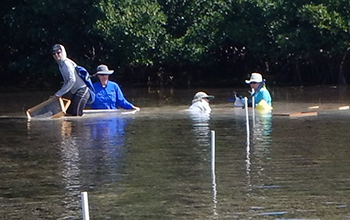 For millions of years, symbiotic bacteria have lived inside the gills of Lucinidae clams found in seagrass meadows located along tropical coasts, such as the Florida Keys. These bacteria play a crucial role in the clams’ survival, while contributing to the overall health of the seagrasses in which the clams live.

Seagrasses are important nurseries for marine life and help protect coasts from storms and sea level rise.
As important as the bacteria are, little was known about their makeup until now. Scientists at Clemson University have published a paper indicating that the bacteria are more taxonomically diverse than previously thought.

Normally, when seagrass decomposes, sulfide is produced and is toxic to clams. However, the bacteria oxidize the sulfide compounds to harmless sulfate, using the energy produced to turn carbon dioxide into sugars for the clams.

“This symbiotic process enables the clams and bacteria to live in environments that are not necessarily hospitable,” said NSF-funded Clemson University biologist Barbara Campbell. Campbell studies how organisms interact with each other, and how their microbiomes — the communities of microorganisms living in and on organisms — are involved in that interaction. “The more diverse the symbionts are, the healthier the ecosystem should be. Diversity matters.”

The new findings have important implications for fisheries and lobster farming, which require healthy coastal ecosystems, including seagrass beds, to thrive.

The researchers plan to conduct additional experiments to explore the genetic diversity of both the clams and the microbes.

“This study underscores the extent of unknown microbial diversity even in well-studied areas, and the flexibility and importance of host-microbe associations in different habitats,” says Simon Malcomber, a program director in NSF’s Division of Environmental Biology.