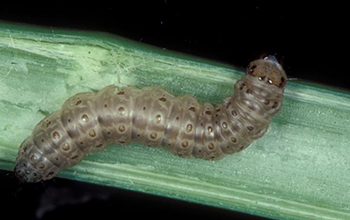 Genes may allow some insects to adjust their biological clocks, survive shorter winters

The ability to synchronize behavioral, morphological and other transitions with the seasons is integral to the life cycle of most insects. A research team led by biologists at Tufts University has found two genes that may allow some insect species to survive climate change by adjusting their biological annual clocks, while others succumb.

The NSF-funded research, published in Current Biology, focused on the European corn borer moth (Ostrinia nubilalis) and pinpointed variation in two circadian clock genes that enable different populations of the moth to adapt their transitions to longer or shorter winters.

The length of winter is expected to decrease by a month over the next century. Earlier springtime activity and emergence from a dormant winter state can allow insect populations to seek out favorable environments and produce more generations per year, improving their survivability in the face of rapid environmental change. The researchers conducted a broad scan of the corn borer genome among five moth populations and found that two genes correlated with this activity.

“We can now start to look at these genes in other insects, to see how variation might be linked to changes in timing for when they go dormant before winter, and when they ‘wake up’ in the spring,” said Genevieve Kozak, one of the study’s authors. “By knowing a little bit about the proteins these genes code for, we can start connecting molecular mechanisms to insect behavior and physiological response to climate.”

Adds George Gilchrist, acting deputy director of the National Science Foundation’s Division of Environmental Biology, “Kozak and colleagues have identified some key genetic mechanisms that may enable species to adapt to the shorter winters and earlier springs that come with climate change.”