Astronomers find a golden glow from a distant stellar collision 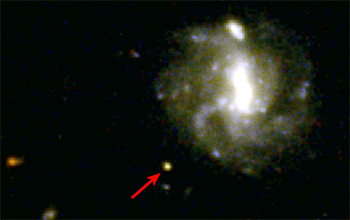 An NSF-supported team of astronomers found new evidence of the occurrence of a kilonova — a cosmic explosion that creates massive amounts of gold and platinum — that went unnoticed during initial observations of a gamma-ray burst spotted in August 2016 but was confirmed after examination of data from the 2017 LIGO detection of gravitational waves.

The team, led by the University of Maryland’s Eleonora Troja, reported their findings in Monthly Notices of the Royal Astronomical Society. A UMD press release also discussed the findings.

Troja and her colleagues made the discovery when they re-examined data from the gamma-ray burst and compared it with the first direct observation of a merger between two neutron stars made in August 2017 by LIGO, NSF’s Laser-Interferometer Gravitational Wave Observatory.

Initially, Troja said, she and her colleagues were disappointed because the data didn’t match expectations. “Then, a year later, the LIGO event happened. We looked at our old data with new eyes and realized we had indeed caught a kilonova in 2016.”

“With the onset of advanced gravitational wave detectors, only recently have astronomers begun to place direct constraints on these processes,” said Hans Krimm in NSF’s Division of Astronomical Sciences.  “This is another great example of how these recent detections are opening a new era of astrophysics.”