Impacts of low-dose exposure to antibiotics unveiled in zebrafish gut 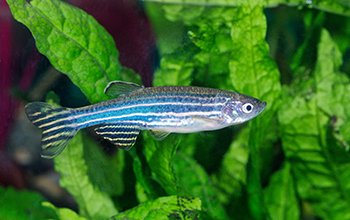 An antibiotic commonly found at low concentrations in the environment can have major impacts on gut bacteria, according to a study by a team of researchers at the University of Oregon, published in the Proceedings of the National Academy of Sciences.

“Low levels of antibiotics are often found as environmental contaminants, for example, from widespread use in raising livestock,” said Raghuveer Parthasarathy, an NSF-supported physics researcher at the university and one of the study’s authors. “It’s known that weak antibiotics can dramatically alter the human gut microbiome, but why this happens has been a mystery.”

The researchers observed larvae of zebrafish — zebrafish share many anatomical similarities with humans and other vertebrates — with 3D microscopy as they were exposed to concentrations of the antibiotic ciprofloxacin at levels comparable to that often found in environmental samples.

The researchers looked separately at zebrafish carrying one of two different bacterial species frequently found in their gut: one that’s fast-swimming and one that’s almost completely aggregated in dense colonies. In the presence of the antibiotic, the fast-swimming species became much slower and formed aggregates, while the normally aggregated species shifted in structure to form even larger colonies, with less fragmentation.

In both cases, the enhanced aggregation made the bacteria more sensitive to contractions of the intestines, leading to increased expulsion from the gut and more than hundred-fold drops in the intestinal populations.

“The presence of low-level antibiotics in the environment can have significant impacts on the gut microbiomes of animals and humans,” said Robert Fleischmann, a program director in NSF’s Division of Biological Infrastructure. “The microscope that enabled this study was supported through an NSF Major Research Instrumentation award. NSF is committed to providing our nation’s scientists with the most advanced instrumentation to support their research.”