Why are big storms bringing so much more rain? 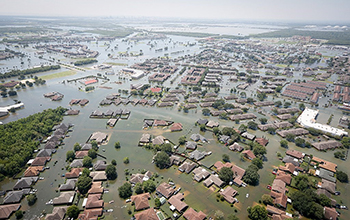 For three hurricane seasons in a row, storms with record-breaking rainfall have caused catastrophic flooding in the southern United States: Harvey in 2017, Florence in 2018 and Imelda in 2019.

A new NSF-funded analysis by Princeton University researchers explains why this trend is likely to continue. The higher moisture content of warmer air and storms’ increasing wind speeds conspire to produce wetter storms, the scientists report in a study published in the journal Climate and Atmospheric Science.

“This study is an important step in understanding the rainfall rate piece of the problem; the picture is one in which changes in rainfall extremes should be carefully examined in assessing flood hazards,” said co-author James Smith of Princeton.

The results help solve a puzzle in recent climate modeling studies. The models project that, by the end of the century, hurricane rainfall rates will increase up to twice as fast as would be expected due to increasing moisture from rising sea surface temperatures alone. The research team wanted to understand what other forces might contribute to the wetter storms.

The scientists suspected that wind might play a role. Climate models also project that tropical storm winds will strengthen as temperatures rise, and studies have shown that storms with stronger winds tend to produce higher rainfall. The team reasoned that a combination of higher sea surface temperatures and stronger storms might explain the predicted increases in rainfall rates.

The scientists found that not only did storms’ holding capacity for water vapor increase because of climate change; storms are indeed getting stronger and contributing to higher rainfall rates.

“Using state-of-the-art modeling techniques, this team examined how and why future rainfall rates of tropical cyclones are changing,” said Anjuli Bamzai, director of NSF’s Division of Atmospheric and Geospace Sciences. “This is a topic with enormous societal impacts.”