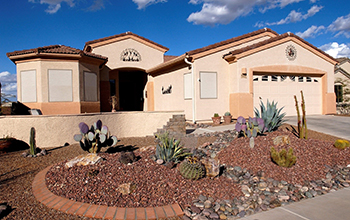 Neighbor peer pressure may be linked to increases in yard fertilization and irrigation across several climate regions of the U.S., according to an NSF-funded study published in the journal PLOS ONE.

In total, households in the U.S. use nearly four times as much land area as farmed corn, suggesting that even small changes to individual properties could lead to big environmental change.

The authors conducted telephone surveys of 7,317 households in six city regions covering major climate zones: Boston, Baltimore, Miami, Minneapolis-St Paul, Phoenix, and Los Angeles. Respondents were asked about using fertilizers, pesticides, and irrigation water on their yards, as well as their age, household income, and the number of neighbors they know by name.

More than 80 percent of respondents had irrigated their yards within the previous year, while 53 percent had applied pesticides. Unsurprisingly, households in hot, dry climates were especially likely to water their yards. However, irrigation was also linked to higher household income, as was fertilization and pesticide use.

In general, higher-income households were approximately 16 to 23 percent more likely to report irrigation, fertilization, and pesticide application than lower-income households, likely because of the costs of these practices. Households where owners knew more neighbors by name were also nine percent more likely to irrigate and to fertilize their lawns. The authors suggest that peer pressure might influence yard care practices.

“It’s eye-opening that most people felt they needed to water their lawns and apply pesticides,” says Doug Levey, a program director in NSF’s Division of Environmental Biology, which funded the research through its Central Arizona-Phoenix Long-Term Ecological Research site. “If neighbors expect this of each other, more and more lawns will be treated in these ways. The ecological and economic costs would also increase.”