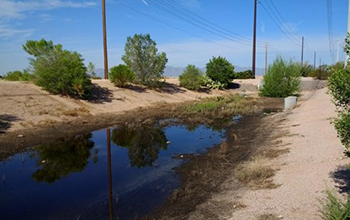 Urbanization has opposite effect in the eastern U.S.

Urban development in the eastern United States results in increased flash flooding in nearby streams, but in the arid West, urbanization has the opposite effect, according to NSF-funded research led by a Penn State scientist who suggests there may be lessons to be learned from the sharp contrast.

Lauren McPhillips led the study of how urban development affects stream flows in the Phoenix, Arizona, metropolitan area and believes the research may yield clues to better stormwater management everywhere.

“We found that ‘flashiness’ — a measure of the rise and fall rates of water flow in streams — actually decreased with the extent of imperviousness in arid, urban, Southwest watersheds,” said McPhillips. “This is the opposite pattern to that observed in previous studies in wetter regions such as the East.”

The study looked at 19 watersheds that drained areas ranging in size from less than a square mile to 175 square miles.

“This study demonstrates that ecological responses are complex in both natural areas and cities,” says Doug Levey, a program director in NSF’s Division of Environmental Biology, which funded the research. “Different urban areas will be impacted by changing rainfall patterns in very different ways.”