Images from solar observatory peel away layers of a stellar mystery 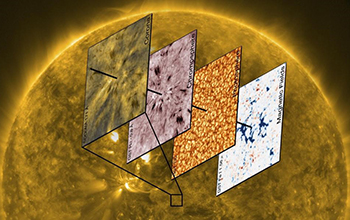 Scientists discover how energy is transferred to sun’s upper atmosphere

NSF-funded scientists at the New Jersey Institute of Technology have shed new light on one of the central mysteries of solar physics: how energy from the sun is transferred to the star’s upper atmosphere, heating it to 1 million degrees Fahrenheit and higher in some regions, temperatures that are vastly hotter than the sun’s surface.

With new images from the New Jersey Institute of Technology’s Big Bear Solar Observatory in Big Bear, California, researchers have revealed what appears to be a likely mechanism – jets of magnetized plasma known as spicules, which spurt like geysers from the sun’s upper atmosphere into the corona.

In a paper published in the journal Science, the team describes the key features of jet-like spicules that are, in solar terms, small-scale plasma structures between 200 and 500 kilometers wide, which erupt continuously across the sun’s expanse. The researchers also, for the first time, show where and how the jets are generated and the paths they travel, at speeds of around 100 kilometers per second in some cases, into the corona.

“Unprecedented high-resolution observations from Big Bear Solar Observatory’s Goode Solar Telescope clearly show that when magnetic fields with opposite polarities reconnect in the sun’s lower atmosphere, these jets of plasma are powerfully ejected,” said solar physicist Wenda Cao, the observatory’s director and a co-author of the paper.

“Big Bear Solar Observatory currently has the world’s most powerful solar telescope in operation,” says Carrie Black, a program director in NSF’s Division of Atmospheric and Geospace Sciences. “These findings highlight the high-quality work that has been carried out at the facility for decades, and the important contributions that are expected to continue in the future.”