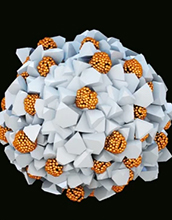 Many medicines are twisted molecules with two mirror image versions, but the body uses only one. Inspired by photosynthetic bacteria, a team funded by a number of NSF research awards has built a catalyst that guides chemical reactions toward the right version of twisted molecules. The catalyst could lead to more efficient production of some medicines.

The curl in drug molecules, a property known as chirality, helps them to interact with similarly curved molecules in human cells, reports the University of Michigan researchers. The molecule with the opposite curve is inactive or, in the worst case, can be very toxic. Yet chemical processes usually give us both versions of chiral molecules, or enantiomers, in equal amounts.

“Chiral catalysts today have been optimized to work in liquids that are expensive and environmentally unfriendly. These catalysts can produce left- or right-enantiomers almost exclusively, but when we want to carry reactions in water, they are destroyed,” said Nicholas Kotov, who led the team that designed and tested the new catalyst.

It would be cheaper and safer to run reactions in water. The catalysts developed by Kotov’s team can do this. They are assemblies of mineral nanoparticles, made chiefly from zinc oxide. They mimic nanoscale organs in bacteria, and they are at least 10 times better at selecting a particular version of a chiral molecule than earlier catalysts of this type.

“To produce these nanocatalysts in large quantities and with high quality requires scalable nanomanufacturing approaches, such as the one studied by professor Kotov that exploits self-assembly,” said Khershed Cooper, NSF program director for advanced manufacturing.