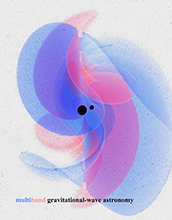 Shrouded in mystery since their discovery, black holes continue to be mind-boggling enigmas in our universe.

That could soon change, according to new simulations conducted by an NSF-funded team at Vanderbilt University, Georgia Tech, California Institute of Technology, and the Jet Propulsion Laboratory, on what’s next for gravitational wave astronomy.

“As a symphony orchestra emits sound across an array of frequencies, the gravitational waves emitted by black holes occur at different frequencies and times,” said lead author Karan Jani of Vanderbilt University. “Some of these frequencies are extremely high-bandwidth, while some are low-bandwidth. Our goal in the next era of gravitational wave astronomy is to capture multiband observations of these frequencies to ‘hear the entire song,’ as it were, when it comes to black holes.”

The possibility that intermediate mass black holes exist but are currently hidden from our view is both tantalizing and frustrating, according to Deidre Shoemaker of Georgia Tech, a co-author of the paper.

“A confirmation of intermediate black holes’ existence, or lack of, will have profound implications for our understanding of the formation of supermassive black holes and the dynamics of the galaxies that host them,” said Pedro Marronetti, a program director in NSF’s Division of Physics.