Plant biodiversity struggles to return in wake of agricultural abandonment 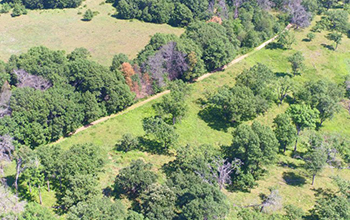 Decades after farmland is abandoned, plant recovery is slow

Decades after farmland is abandoned, plant biodiversity and productivity struggle to recover, according to new University of Minnesota research.

NSF-funded researchers examined 37 years of data tied to plant biodiversity (number of different species) and plant productivity (amount of plants) in 21 grassland and savanna areas in Minnesota. Most of the fields had been ploughed then abandoned between one and 91 years earlier.

The results are published in the journal Nature Ecology & Evolution.

The scientists compared the plots to nearby land that had not been significantly impacted by human activity. They found that local grassland plant diversity increased over time in abandoned fields but recovered incompletely, and plant productivity did not significantly recover.

“When taken at a global scale, fossil records indicate that plant species are going extinct at rates hundreds of times faster than the natural extinction rate,” said Forest Isbell, a co-author of the study. “At the local level, we’re seeing how human activity can affect the loss of species.”

The researchers suggest that the slow, incomplete recovery of species on abandoned farmland in Minnesota is likely happening in ecosystems around the world where land has been cleared for agriculture, logging or other human activities.

“This study shows that, despite a common perception that ecological systems are resilient, they can be so slow to rebound that they’re unlikely to return to the same undisturbed state,” says Francisco Moore, a program director in NSF’s Division of Environmental Biology, which supported the research through its Cedar Creek Long-Term Ecological Research site.