Nearly 40% of plant species are very rare, and vulnerable to climate change 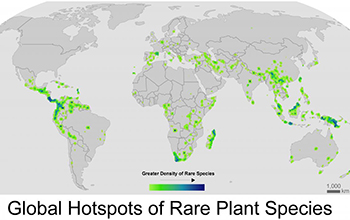 Almost 40% of global land plant species are categorized as very rare, and these species are most at risk for extinction as climate continues to change, according to new NSF-funded research.

The findings are published in the journal Science Advances.

“We had a good approximation of the total number of land plant species, but we didn’t have a handle on how many there really are,” said lead author Brian Enquist, an ecologist at the University of Arizona.

Thirty-five researchers from institutions around the world worked for 10 years to compile 20 million observational records of the world’s land plants. The result is the largest dataset on botanical biodiversity ever created. The researchers hope this information can help reduce loss of global biodiversity by informing conservation actions that include consideration of the effects of climate change.

Rare species tend to cluster in a handful of hotspots, such as the Northern Andes in South America, Costa Rica, South Africa, Madagascar and Southeast Asia. These regions remained climatologically stable as the world emerged from the last ice age, allowing such species to persist.

The plants had a relatively stable climate in the past, but that doesn’t mean they’ll have a stable future. The research also revealed that rare plant species hotspots are projected to experience a high rate of future climate change and human disruption.

“Documenting patterns in biodiversity at a global scale requires collaboration by an international community of scientists,” said Peter McCartney, a program director in NSF’s Division of Biological Infrastructure. “Shared data resources such those supported by the Division of Biological Infrastructure enable that collaboration and provide baseline data for assessing response to forces of change.”