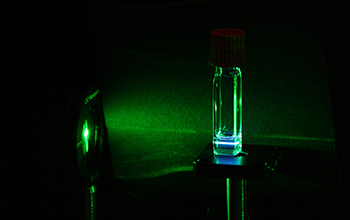 Scientists at the University of California, Riverside and The University of Texas at Austin have demonstrated that it’s possible to achieve photon up-conversion, the emission of higher energy light, when using carefully designed structures containing silicon nanocrystals and specialized organic molecules.

While photon up-conversion can overcome this limitation, up-converted materials have low efficiency or high toxicity. Silicon is known for being nontoxic, but researchers had not been able to demonstrate that silicon nanocrystals can up-convert photons, leaving this promising cancer treatment tantalizingly out of reach.

Scientists attacked this problem by studying the surface chemistry of silicon nanocrystals. The team learned to attach ligands, which help bind molecules together, to a nanoparticle. The ligands are designed to transfer the energy from the nanocrystals to surrounding molecules.

The scientists then shined laser light into a solution. They found that silicon nanocrystals with appropriate surface ligands can rapidly transfer energy to surrounding molecules.

“This discovery would not have been possible without collaboration between one NSF-funded group conducting basic research on photon up-conversion with another NSF-funded group conducting basic research on silicon nanoparticles,” says George Janini, a program director in NSF’s Division of Chemistry. “Investment in basic chemistry and materials research advances knowledge and contributes to national health, two of NSF’s strategic goals.”