Whales may owe their efficient digestion to millions of tiny microbes 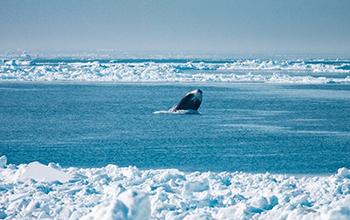 A study by NSF-funded researchers at the Woods Hole Oceanographic Institution shows that the microbial communities inside whales may play an important role in the digestion of one of the ocean’s most abundant carbon-rich lipids: wax esters. The findings were published in the journal of the International Society for Microbial Ecology.

Wax esters are one of the most difficult fats to digest for many animals, including humans. They are especially abundant in tiny crustaceans such as krill and copepods — favorite prey of filter-feeding bowhead and endangered North Atlantic right whales. Wax esters are also an important lipid in the oceans worldwide, at times storing at least half the carbon produced by plant-like marine organisms.

Bowhead whales are highly efficient at digesting these lipids. “We found that more than 80 percent of the lipids eaten by bowhead whales are wax esters, but less than 30 percent remain in the large intestine,” says WHOI marine scientist Carolyn Miller, lead author of the study.

If wax esters are difficult to digest, how can bowhead and other baleen whales do so efficiently? Part of the answer could be the millions of tiny gut microbes living in their digestive tracts. These microbial communities are commonly referred to as gut microbiota.

In humans and other terrestrial animals, gut microbes play important roles in many aspects of health, including digestion, where they break down otherwise indigestible components.

In the lab, Miller and her colleagues analyzed samples from bowhead whales’ gastrointestinal tracts, hoping to detect changes in microbial communities and lipids throughout the gut of each whale. What they found was a strong connection between the microbial community and a decrease in the presence of wax esters in the lower part of the small intestine.