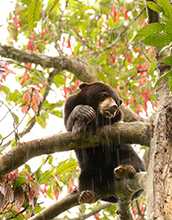 Animals that evolved in environments subject to large-scale habitat-altering events such as fires and storms are better equipped to handle forest fragmentation caused by human development than species in low-disturbance environments, new NSF-funded research shows.

Oregon State University scientists led an international study that provides a road map as conservation managers consider the effects of forest edges on wildlife in setting up reserves.

The findings were published in Science.

“Everyone knows habitat loss is bad for animals, but there’s been a longstanding debate about fragmentation – the arrangement of remaining habitat,” said co-corresponding author Matt Betts of the OSU College of Forestry. “How do we design wildlife reserves? Do we make many small ones, or fewer big ones, or do we make corridors?”

The study, led by Betts and OSU’s Christopher Wolf, also suggests that the closer a forest is to the equator, the more sensitive its wildlife species are to fragmentation. Tropical species have historically encountered much less disturbance than those in temperate zones, so respond to it more quickly. Wolf cautions, however, that greater forest edge sensitivity at lower latitudes doesn’t mean there isn’t also edge sensitivity in temperate zones. “It’s a matter of degree,” he said.

“The novelty of this research is its global-scale prediction of where disturbance-sensitive species are likely to be found,” said Betsy von Holle, program director in NSF’s Division of Environmental Biology. “Understanding what drives these patterns has major implications for conservation.”