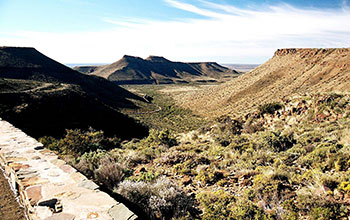 Some 250 million years ago, simultaneous mass extinctions of marine and terrestrial life occurred in an event known as the End-Permian. Or so scientists believed.

New research led by Colby College geologist Robert Gastaldo has revealed the most definitive proof to date that the extinctions did not occur at the same time. The findings, published in the journal PALAIOS, have implications for the impact of a possible future biodiversity crisis driven by climate change and a warming planet.

The NSF-funded research shows that the vertebrate fossil record reported in earlier studies – which has been used as the standard in interpreting Earth’s largest known mass extinction – is inaccurate and not sufficient to substantiate the long-held belief that marine species and terrestrial vertebrates perished together.

The findings, which resulted from 15 years of research in South Africa’s Karoo Basin, show that an event 250 million years ago devastated marine life but didn’t affect life on land. Terrestrial change happened hundreds of thousands of years earlier and very gradually, the scientists found.

“While the initial goal was to corroborate conclusions of earlier studies about what is known as the End-Permian event, our data have consistently been at odds with what has been reported,” said Gastaldo. “Purportedly extinct creatures were actually roaming around the Karoo hundreds of thousands of years later than the time scientists had written them off. And their successors were alive before they were supposed to have evolved.”

Gastaldo and colleagues came to these conclusions after examining the placement of fossil remains in the rock layers of the Karoo Basin.

“This study provides a new perspective on the largest mass extinction event in Earth’s history,” said Dena Smith, a program director in NSF’s Division of Earth Sciences. “Studies like this help us learn about past events, and can help us understand the potential effects of modern climate shifts.”