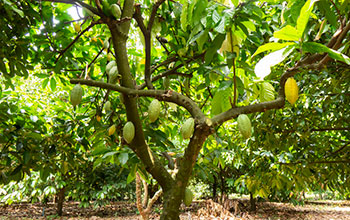 Discovery has implications for bolstering long-lived trees, other crops

Chocolate-producing cacao trees that are resistant to a major pathogen were identified by an international team of plant geneticists. The NSF-funded finding points the way for plant breeders to develop trees that are tolerant of the disease.

Researchers used a method of identifying resistance genes that could be used broadly, according to the team’s leader, Mark Guiltinan, a plant molecular biologist at Penn State. He believes the strategy represents a major step forward in the quest to develop disease resistance in long-generational plants such as trees.

The focus of the study was the tropical tree Theobroma cacao, the source of chocolate. Its seeds are a major export from many producing countries in Central and South America, Africa, and Asia — but every year, 30% to 40% of pre-harvest yield is lost to diseases.

Bolstering cacao’s resistance to disease is the most efficient and environmentally friendly approach for disease management, Guiltinan said.

“We sequenced the genomes of 31 plants to discover high-priority candidate disease-resistance genes,” Guiltinan said. “Once we identify the resistance genes and their locations, we’ll give that knowledge, along with molecular markers, to plant breeders.”

The results were published in the journal Tree Genetics & Genomes.

“This work begins to identify the molecular components of the plant immune system,” says Gerald Schoenknecht, a program director in NSF’s Division of Integrative Organismal Systems. “The research provides insights into how cacao trees defend themselves against pathogens — and may help more cacao end up in our chocolate instead of destroyed by fungal disease.”