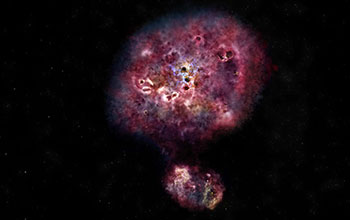 Astronomers using the Atacama Large Millimeter/submillimeter Array (ALMA) have spotted the light of a massive galaxy seen only 970 million years after the Big Bang. Called MAMBO-9, it’s the most distant, dusty, star-forming galaxy that has ever been observed without the help of a gravitational lens.

NSF provides funding for ALMA, an astronomical interferometer of 66 radio telescopes in the Atacama Desert of northern Chile. Additionally, NSF supported the research through its funding of NRAO, which is operated under cooperative agreement by Associated Universities, Inc.

MAMBO-9’s light was detected ten years ago by study co-author Manuel Aravena using technologies in Spain and France. But the observations were not sensitive enough to reveal the distance of the galaxy.

Now, however, ALMA’s sensitivity has enabled astronomers to determine the distance of MAMBO-9. “We found the galaxy in a new ALMA survey specifically designed to identify dusty star-forming galaxies in the early universe,” said Caitlin Casey of the University of Texas at Austin and lead author of the study published in The Astrophysical Journal. “And what is special about this observation is that this is the most distant dusty galaxy we have ever seen in an unobstructed way.”

“While it is challenging to explain such a massive galaxy so early in the history of the universe, discoveries like this allow astronomers to develop an improved understanding of, and ask ever more questions about, the universe,” Pesce said.

An article on NRAO’s website also discusses the findings.