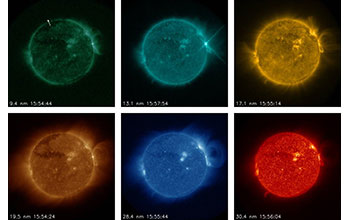 Computers can learn to find solar flares in vast streams of images and help scientists issue timely space weather alerts, according to a new NSF-funded study. The research was published in the Journal of Space Weather and Space Climate.

The machine-learning technique, developed by scientists at the Cooperative Institute for Research in Environmental Sciences at the University of Colorado Boulder and the National Centers for Environmental Information, searches massive amounts of satellite data to pick out features significant for space weather.

Changing conditions on the sun and in space can affect various technologies on Earth, blocking radio communications, damaging power grids and diminishing navigation system accuracy. The ability to process solar data in real time is important because flares erupting on the sun affect Earth over the course of minutes.

But solar imagers produce a new set of observations every few minutes. For example, the Solar Ultraviolet Imager on the GOES-R Series satellites runs on a four-minute cycle, collecting data in six different wavelengths every cycle.

“We need tools to process solar data in digestible chunks,” said Dan Seaton, an institute scientist and one of the paper’s co-authors. J. Marcus Hughes, a computer scientist at CU Boulder and lead author of the study, created a computer algorithm that can look at all the Solar Ultraviolet Imager images simultaneously and spot patterns in the data.

“This work grew out of research that began during an NSF summer Research Experiences for Undergraduates project, illustrating how important and impactful summer research experiences can be,” says Manda Adams, a program director in NSF’s Division of Atmospheric and Geospace Sciences.