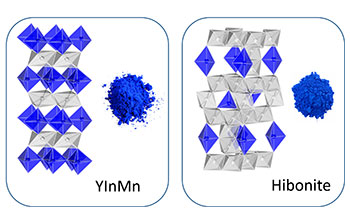 Scientist Mas Subramanian of Oregon State University, who made history a decade ago with the accidental discovery of the first new blue inorganic pigment in more than two centuries, is again pushing forward the science of color.

Analyzing the crystal structure of pigments based on hibonite, a mineral found in meteorites, Subramanian has paved the way for more pigments with vivid hues that are stable, durable and non-toxic.

Findings from the NSF-supported study were published in the American Chemical Society journal ACS OMEGA.

Subramanian discovered YlnMn blue in 2009 when he was experimenting with new materials that could be used in electronics applications.

Through much of human history, people around the world have sought inorganic compounds that could be used to paint things blue, often with limited success. Most had environmental or durability issues.

“Most pigments are discovered by chance,” Subramanian said. “The color of a material depends not only on the chemical composition, but also on the intricate arrangement of atoms in the crystal structure.”

Before YInMn blue, the last blue discovery was cobalt aluminum oxide-based blue, synthesized by a French chemist in 1802. Cobalt blue production, however, requires a significant amount of a cobalt salt that is hazardous to humans and the environment.

Now, by analyzing the structure of hibonite-based blue pigments, Subramanian has developed a way to match or surpass cobalt blue’s vividness while using much less of the harmful carcinogenic cobalt ion or replacing it entirely.

“In nature, hibonite is only found in meteorites that have been subjected to thousands of degrees of temperature when they go through Earth’s atmosphere, so it makes sense that the structure is remarkably stable,” he said. “These kinds of mineral structures are probably the future for designing durable and safe inorganic pigments.”