Connecting the prehistoric past to the global future 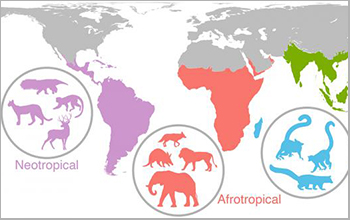 In seeking to understand factors that affect global biodiversity patterns, scientists have focused much of their research on present-day climate, such as patterns of temperature or rainfall, or recent human impacts, such as urbanization and the destruction of wild lands.

Now, however, a multi-institutional team that includes NSF-funded researchers reports that climate and human impacts from the past influence current patterns of mammal diversity.

The findings, published in the Proceedings of the National Academy of Sciences and discussed in press releases from UMass Amherst and Arizona State University, imply that the present-day distribution of life’s diversity on Earth is not necessarily driven by recent climate or human impacts; legacies of the ancient past continue to structure patterns of life on Earth today.

The researchers analyzed a database of 515 mammal communities across the globe, collecting data on traits such as body size and diet and evolutionary relationships.

One of the most important findings of their study, the authors say, is that there is no one-size-fits-all explanation for what structures mammal biodiversity across the world. Each of the world’s major regions has a unique ecological and evolutionary history, and these histories continue to strongly influence the distribution and diversity of mammalian life on Earth. Ancient climate change and ancient human impacts are important for understanding why and how species became distributed the way we see them today.

One of the study’s authors, UMass Amherst’s Jason Kamilar, hopes the team’s findings will help guide future research. “As scientists continue to understand global patterns of biodiversity, we suggest they incorporate past climate and human impact factors into their studies,” he says. “This will result in a more holistic understanding of what drives biodiversity and how it may respond to ongoing and future human-caused changes in the 21st century.”

Rebecca Ferrell, the director of NSF’s Biological Anthropology program, notes, “The global, deep-time perspective of this research offers us insight into the complex interactions among species, including humans, through time and space, further contextualizing our understanding of primate and broader mammalian biodiversity.”