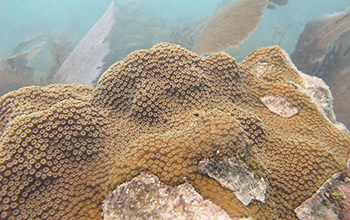 Microorganisms play important roles in the health and protection of coral reefs, but exploring these roles can be difficult because of the lack of unspoiled reef systems throughout the global ocean.

An NSF-funded study led by scientists at the Woods Hole Oceanographic Institution and their colleagues compared seawater from 25 reefs in Cuba and the U.S. Florida Keys and found that reefs with higher microbial diversity and lower concentrations of nutrients and organic carbon were markedly healthier.

“Human impacts such as overfishing and pollution lead to changes in reef structure,” says Laura Weber of Woods Hole, lead author of a paper published in the journal Environmental Microbiology. A healthy reef provides home to a diverse group of marine animals, including herbivores that in turn help control algal growth. “Removal of algae grazers such as herbivorous fish and sea urchins leads to increases in macroalgae, which then leads to increased organic carbon, contributing to the degradation of coral reefs,” Weber adds.

Researchers took seawater samples and measurements that offer insights into the microbial community. They found a notable difference between more impacted nearshore reefs in the Florida Keys and the heavily protected offshore reefs in Cuba such as Jardines de la Reina (Gardens of the Queen), the largest protected area in the Caribbean, located about 50 miles off the southern coast of Cuba.

The offshore reefs provide habitat and feeding grounds for large numbers of fish, including top predators such as sharks and groupers.

“This elegant study furthers our understanding of how the microbial community changes with declining reef and water quality,” says Dan Thornhill, a program director in NSF’s Division of Ocean Sciences.