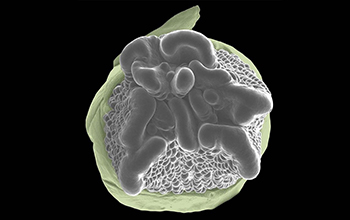 Shifting focus to growth instead of defense boosts crops

NSF-funded scientists at Cold Spring Harbor Laboratory are figuring out how to pack more kernels onto a corn cob. One way to boost the productivity of a plant, they say, is to redirect some of its resources away from maintaining an overprepared immune system and into enhanced seed production. Now, a team led by CSHL scientist David Jackson has found a gene that could help tweak that balance.

In work reported in the Proceedings of the National Academy of Sciences, Jackson and his team have identified a gene in corn that controls both the plant’s development and its immune system. Manipulating this gene, the researchers say, could be a way to increase crop yields by reprogramming how a plant balances its investments in growth and defense.

To flourish in the wild, plants must be constantly on guard. With an unpredictable array of bacteria, fungi and viruses lurking in the soil and air, a plant must maintain a robust immune system that is ready to counter any attack. This vigilance comes at a cost: Energy spent on pathogen defense cannot be used to grow taller or produce seeds. The trade-off is crucial.

For crop plants, however, the situation is different. Corn in a farmer’s carefully tended field faces fewer threats than the same plant might encounter on an untamed prairie. In this controlled environment, plants could probably ease up on their anti-pathogen protections — but getting them to do so will require some genetic tinkering.

“If we can convince the plants that they don’t have to spend a lot of energy on defense, they can put more energy into making seeds,” Jackson says.