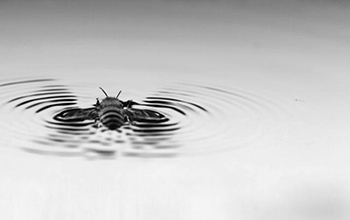 Walking on Caltech’s campus, engineer Chris Roh happened to see a bee stuck in the water of Millikan Pond. Although it was a common sight, it led Roh and his colleague Mory Gharib to a discovery about the unique way bees navigate the interface between water and air.

The incident occurred around noon, so the overhead sun cast the shadows of the bee — and, more importantly, the waves churned by the flailing bee’s efforts — directly onto the bottom of the pool.

As the bee struggled to make its way to the edge of the pond, Roh noticed that the shadows on the pool’s bottom showed the amplitude of the waves generated by the bee’s wings.

Gharib and Roh recreated the conditions of Millikan Pond. They placed water in a pan, allowed it to become perfectly still, and then put bees, one at a time, in the water. As each bee flapped about in the water, filtered light was aimed directly down onto it, to create shadows on the bottom of the pan.

A paper describing the results of the NSF-funded research was published in the journal Proceedings of the National Academy of Sciences.

When a bee lands on water, the water sticks to its wings, robbing it of the ability to fly. However, that stickiness allows the bee to drag water, creating waves that propel it forward. “The motion of the bee’s wings creates a wave that its body is able to ride forward,” Gharib says. “It hydrofoils, or surfs, toward safety.”

Roh and Gharib are applying their findings to robotics research, developing a small robot that uses a similar motion to navigate the surface of water. The motion could be used to generate robots capable of both flying and swimming.