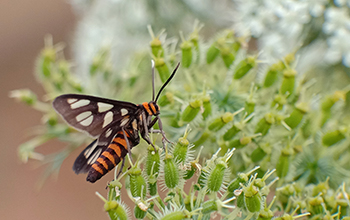 A new NSF-supported study published in Frontiers in Ecology and Evolution reveals that less appetizing moths are more nonchalant when attacked by bats, whereas more palatable moths tend to employ evasive maneuvers as a defense mechanism. The results may help researchers uncover new knowledge about animals’ chemical defenses.

Moths have evolved mechanisms such as chemical defenses and physical maneuvers to evade and deter predators, but researchers understand relatively little about how these factors are linked and how they vary between different species.

Researcher Nicolas Dowdy of the Milwaukee Public Museum and Wake Forest University noticed that certain species of tiger moths seemed relatively relaxed when attacked by bats. He and colleagues sought to identify the factors that contribute to this behavior, hypothesizing that nonchalant moths have evolved chemical defenses that make them unpalatable.

To test this hypothesis, the team collected five different species of tiger moths and released them in an outdoor “flight arena” at night, where wild bats swoop in to feed. Using infrared cameras, the team monitored interactions between the bats and moths and recorded how often different species displayed evasive or nonchalant behavior during a bat attack. They also measured how palatable the moths were to the bats by observing whether the bats consumed the moths or spat them out.

This correlation allowed the researchers to predict the evasive or nonchalant behavior of the moths based on their palatability.

“This is a very elegant experiment that provides quantitative evidence for the relationship between an important behavior that is present in many prey species and their chemical palatability,” said Patricia Soranno, director of NSF’s Division of Biological Infrastructure, which supported the research along with NSF’s Division of Integrative Organismal Systems. “The results give biologists some predictive tools for studying this important relationship in other animals, and it even gives us tools to go back in time by studying preserved museum specimens.”