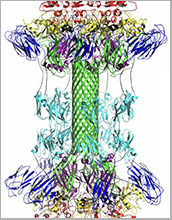 A newly published paper in PNAS details a research breakthrough that provides a promising starting point for scientists to create drugs that can cure C. diff — a virulent infection associated with health care facilities that causes severe diarrhea, nausea, internal bleeding, and potentially death. The bacteria affect roughly half a million Americans and cause nearly 15,000 deaths in the U.S. annually.

Overuse of antibiotics has increased the risk of patients in health care facilities acquiring C. diff and made some strains of the bacteria particularly hard to treat. But newly discovered information about a type of toxin released by the most dangerous strains of C. diff is providing researchers with a map to develop drugs that can block the toxin and prevent the bacteria from entering human cells.

The scientists believe that it is a binary toxin (it needs two components to function) that might employ a method similar to that used by anthrax to enter cells. Using this information as their starting point, the researchers sought to characterize how the C. diff toxin is different from anthrax.

The researchers observed two similar but distinct forms of the C. diff toxin — one where they saw a pore-forming channel and one where the channel was invisible. That observation gave them clues about how to stop the channel from forming and bacteria from entering the cell.

According to Robin McCarley, a program director in NSF’s Division of Chemistry, “NSF funds this type of research because it allows a fundamental understanding of the behavior, at the molecular level, of a highly complex biological system with broad impacts on society.”