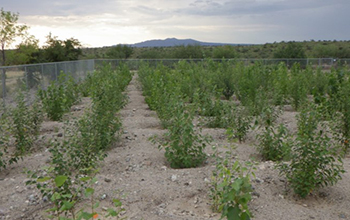 Some trees, such as poplars, emit gases that worsen air pollution and alter climate

Poplar trees are widely used in commercial products, but, like several other tree species, they emit gases to the atmosphere that worsen air pollution and alter climate. Now field trials in Oregon and Arizona show that poplar trees, which emit trace amounts of the gas isoprene, can be genetically modified to leave air quality unharmed.

The NSF-funded findings, published in the journal Proceedings of the National Academy of Sciences, are important because poplar plantations cover 9.4 million hectares (36,294 square miles). Poplars are fast-growing trees that are sources of biofuels and other products, including paper, pallets, plywood and furniture frames.

Poplars and other trees used in agroforestry, including palms and eucalyptus, produce isoprene in their leaves in response to climate stress such as high temperature and drought. The isoprene alleviates those stresses by signaling cellular processes to make protective molecules; however, isoprene is so volatile that millions of metric tons leak into the atmosphere each year.

Scientists at the University of Arizona and other institutions genetically modified poplars to produce no isoprene, then tested them in three- and four-year trials at plantations in Oregon and Arizona.

The researchers found that trees whose isoprene production was genetically suppressed suffered no ill effects in terms of photosynthesis or biomass production. The trees were able to make cellulose, used in biofuel production, and grow as well as those that produced isoprene.

“This research demonstrates the importance of studies that span cellular to ecosystem processes in developing strategies to enhance biomass production, while reducing potential harmful effects on the environment,” says Liz Blood, a program director in NSF’s Division of Environmental Biology.