Malaria in the Amazon increases with deforestation 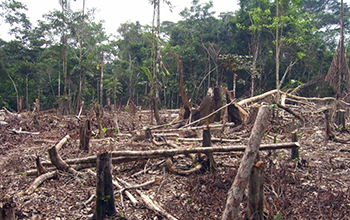 Then the disease reduces the rate of deforestation — for a time

A study by NSF-funded scientists Andy MacDonald at UC Santa Barbara and Erin Mordecai at Stanford found a direct relationship between deforestation in the Amazon and the transmission of malaria by mosquitoes. Regions with a lot of deforestation saw many more cases of malaria. The increase in malaria was associated with a subsequent decrease in the rate of deforestation. The paper appears in the journal Proceedings of the National Academy of Sciences.

“Deforestation is a huge issue in the Brazilian Amazon because of the political and economic pressures pushing up against environmental health, biodiversity, social justice and indigenous rights,” says Mordecai. “We found that deforestation is not only an ecological disaster but also a major threat to human health.”

“People have been really interested in the effect of deforestation on malaria transmission,” adds MacDonald, a disease ecologist at UCSB. “In the 1970s, Brazil started to incentivize settlement of the Amazon, and we saw a huge increase in malaria transmission associated with that.”

MacDonald and Mordecai compared trends in deforestation with data on malaria cases. The Brazilian government keeps meticulous public health and socio-demographic records that proved a valuable resource, the scientists say. For environmental conditions, they turned to satellite and remote sensing data, mostly from Landsat and MODIS satellite imagery.

“For every square kilometer of forest lost we can expect about six new cases of malaria,” says Mordecai.  “At the same time, malaria affects the productivity and wellbeing of the populations settling the interior of the Amazon, where every malaria case leads to about 0.07 fewer square kilometers of forest being cleared.”

Adds Sam Scheiner, a program director in NSF’s Division of Environmental Biology, “As this research shows, human-caused changes in the environment can have unexpected effects on human health.”