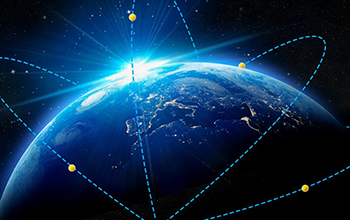 Think of it as a celestial parlor game: What is the minimum number of satellites needed to see every point on Earth? And how might those satellites stay in orbit and maintain 24/7 coverage while contending with Earth’s gravity field, its lumpy mass, the pull of the sun and moon, and pressure from solar radiation?

In the mid-1980s, researcher John Draim proposed what is generally considered to be the ideal solution: a four-satellite constellation. However, the amount of propellant needed to keep the satellites in place, and the ensuing cost, made the configuration unfeasible.

Now, a National Science Foundation-sponsored team led by engineer Patrick Reed at Cornell University and scientists at The Aerospace Corporation has discovered the right combination of factors to make a four-satellite constellation possible. The finding could drive advances in telecommunication, navigation and remote sensing.

In an ingenious twist, the researchers accomplished this by making the forces that ordinarily degrade satellites instead work in their favor.

“One of the interesting questions we had was: Can we actually transform those forces?” Reed said. “Instead of degrading the system, can we actually flip it such that the constellation is harvesting energy from those forces and using them to actively control itself?”

The AI-based evolutionary computing search tools the team has developed are ideally suited for navigating the numerous complications of satellite placement and management, the scientists said.

To sift through the hundreds of thousands of possible orbits and perturbations, the team used the NSF-funded Blue Waters supercomputer at the University of Illinois at Urbana-Champaign. Blue Waters is one of the most powerful supercomputers in the world, and is part of NSF’s strategy for advanced computing infrastructure to facilitate transformative research in computational and data-intensive science and engineering.

“This research project is important for geoscientists, information technologists, and researchers in many other areas of science and engineering,” says Edward Walker, a program director in NSF’s Directorate for Computer and Information Science and Engineering. “The discovery has important implications for global commerce and national defense vital to our country. NSF funds high-performance computing instruments such as Blue Waters, which includes software and human experts to assist scientists in using the instrument, to enable discoveries that would not be possible otherwise.”