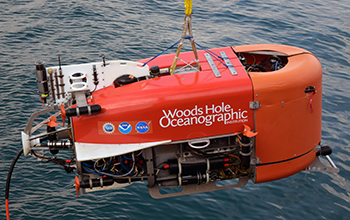 As with self-driving cars, handing the wheel over to a computer algorithm can be unsettling. The same goes for ocean robots, especially when they need to work in tricky and hazardous environments.

“For a vehicle to take a sample without a pilot driving it is a huge step forward,” says Rich Camilli, a scientist at WHOI. “One of our goals was to toss out the joystick, and we were able to do that.”

Camilli was part of a team on an expedition aimed at learning about life in the harsh, chemical-laden environment of Kolumbo and exploring the extent to which scientists can hand over the controls to ocean robots and allow them to explore without human intervention.

Slightly smaller than a Smart Car, Nereid Under Ice was equipped with artificial intelligence -based automated planning software — including a planner named Spock — that enabled it to decide which sites to visit in the volcano and where to take samples autonomously.

“We can eventually see having a network of cognitive ocean robots where there’s a shared intelligence spanning an entire fleet, with each vehicle working cooperatively like bees in a hive,” says Camilli. “It will go well beyond losing a joystick.”

“Wireless communications with underwater vehicles are limited, so remote-controlling an underwater vehicle can be impractical,” says David Miller, a program director in NSF’s Directorate for Computer and Information Science and Engineering.  “More than 70% of Earth is covered by water. Understanding this environment is critical to the future of the country and humanity at large. This research is an important step toward exploring the submerged environment without tethers and remote controls.”