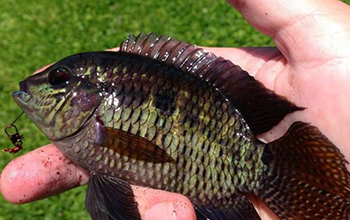 Sometimes scientists make mistakes. A case in point is the chanchita, a South American non-native freshwater fish that has been swimming in Florida’s waters for at least two decades, all the while misidentified by experts as another invader, the black acara. The results of the NSF-funded research are published in the journal BioInvasions Records.

“Even the professionals get it wrong,” said Robert Robins, Florida Museum of Natural History ichthyology collection manager. “The chanchita has been right here, right under our noses. It’s spread into seven counties and five river drainages in Florida, well beyond the Tampa Bay drainage where it appears to have been introduced.”

The two fish species look strikingly similar. The misidentification was eventually spotted by amateur fish collectors as well as by museum biologists who study non-native fishes. Because the non-native chanchita is cold-tolerant, researchers say it could have a more widespread impact in Florida than the black acara and could threaten Florida ecosystems.

Non-native fish species have the potential to impact Florida’s aquatic ecosystems by outcompeting native fish for habitat and food resources.

Locating and identifying non-native fish requires an interdisciplinary approach and coordination with partners from across the state, scientists say. This finding is leading them to look at other non-native fish species –- it’s possible that there may be other fish that are misidentified, and properly identifying the species is critical for proper management.

“This study demonstrates the value of information available through museum collections, which is too often hidden away for decades,” says Reed Beaman, a program director in NSF’s Division of Biological Infrastructure. “Making the digital data associated with collections available to the public is an added value.”